A trader was returning to his town with a pregnant mare he had just bought at a fair.

The sky darkened mid-way. As the mare was big with its baby, she struggled to take even one more step. So he approached a village to spend the night.

At the entrance of the village, there was an oil-merchant’s mill and a thatched shelter for keeping oilcakes and oil for sale. With the merchant’s permission, the trader tied up his mare to the oil-mill and lied down under the thatch.

When he woke up, it was broad daylight. He rolled up his stuff and got ready for the journey.

When he went to untie his mare from the oil-mill, a surprise was waiting for him.

Yes, his mare had given birth to a beautiful little foal!

Happily, the trader untied his mare and started leaving along with the foal. Just then, he heard the call, “Stop!” The trader stood stunned.

“Mister horseman! Why sir, you are making away with the foal that my oil-mill has birthed…” he threatened.

The trader could not understand a thing.

“Mister…you came here with just a mare. So leave with the mare only…the foal was birthed by my oil-mill…” he thundered indignantly.

The flustered trader went to the village elders and they gathered the village council. The council made up of utter fools as it were, asked, “How do we know that it was indeed the mare who birthed the foal? What is the proof?”

Hmm…poor trader, what answer could he give?

Finally, since it could not be proved that it was surely the mare who gave birth to the foal, they passed judgment that the foal belonged to the milliner. The saddened trader turned to go home. On the way he bumped into a fox.

“Brother sir! Why do you look so worried?” it asked. The horseman told the fox all that had happened and cried.

After thinking a bit, the fox told him, “You go back and call the council. I will speak the law for you.” Following the fox’s instructions, the trader went back and again gathered the village council. He also told them that ‘Mr Fox’ was going to plead for him. The crowd gathered. Everybody eagerly waited for Mr Fox to come.

Time was running out. The trader lost hope that the fox would ever show up. But just when he was about to walk away, Mr Fox came running in hastily. The proceedings began. Both the parties related their arguments. Without even lending an ear to them, the fox yawned and nodded off ever so sleepily. 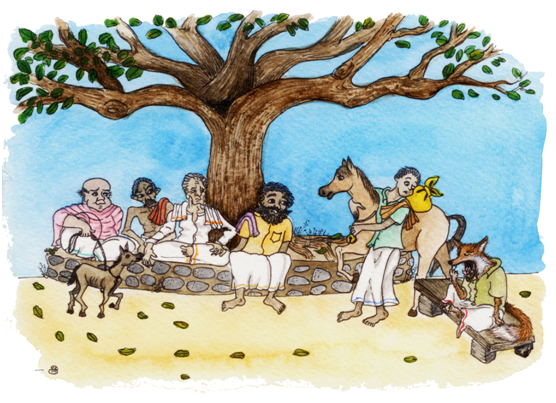 One of them bellowed, “What is this Mr.Fox? Are you sleeping in the council only to humiliate us?”

Without the slightest alarm, the fox replied, “Sir, don’t be angry. I did not sleep a wink last night. I was wide awake till dawn…”

“Oh, the ocean in our village had caught fire, and we had a rough time putting it out. All our villagers had to toil and toil till dawn!” fabled the fox.

The entire gathering guffawed with laughter!

“Why do you lie through your nose? Where in the world does an ocean – for that matter, water – ever catch fire?” they asked the fox.

The fox asked back, “Why sirs…in such times when an oil-mill can give birth to a foal, is it so surprising that an ocean can catch fire?” The village elders were taken aback by this question.

They started murmuring among themselves.

‘Ofcourse…how can an oil-mill ever give birth to a baby foal?!’

– there were so many such voices.

And then…? According to the new judgment, the trader got back his foal along with the mare and drove them both towards his home!

This site uses Akismet to reduce spam. Learn how your comment data is processed.